Holy nonsense, Batman! I may or may not have died a little (in a good way) when I saw these images for the first time. But first, maybe I should back up and explain the context a bit…

True Believers (which will have its world premiere this summer at the Factory Theatre, July 12 – 21) has a few scenes that take place in a MMORPG (that’s Massive Multiplayer Online Role Playing Game… don’t worry, I didn’t know that before I read the play, either). We wanted to avoid copyright issues so we couldn’t just “act” out scenes in World of Warcraft, but that created a dilemma: where would we find animators for this project?

Luckily, the students over at Boston University Center for Digital Imaging Arts (CDIABU) take submissions for final projects from companies in the proverbial “real world” and they were so excited about our project, they accepted our proposal to animate the scenes!

So here’s a super-preliminary sneak peek at the characters for Ted and Chloe in the game – but we’re not giving it all away yet! There are a few hidden gems in the animation, like their user-names, meeting place and stats, but you just might have to wait for the show to see all of that (wink, wink, nudge, nudge, [second shameless plug for the show: July 12-21 at the Factory Theatre]). 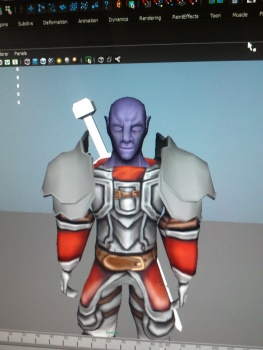 One of our animators, Jacob has a blog if you would like to see more of his work on Ted. http://thedistinguishedcanadian.wordpress.com (he’s actually Canadian so it’s okay). He’ll be finishing up the model on the body this weekend – I’m so psyched for the finished product!