Hello folks, we’re deep in rehearsals for our reading of local playwright Meron Langsner‘s Burning up the Dictionary this coming Thursday, May 17 at 7:00 PM at Trident Booksellers & Cafe. Here’s your chance to get to know a bit more about the playwright before the event! We hope to see you there! 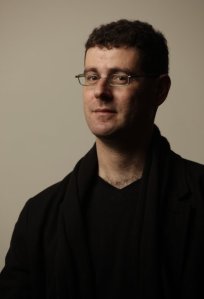 How did you get started in playwrighting?

I wanted to be a writer long before I discovered theatre.  I became active in theatre during college first as a dancer (which I came into by way of martial arts), then as an actor and director.  Near the end of my undergrad work I tried my hand at writing plays, and from there it was pretty much a matter of consolidating interests.  As I came into theatre both later than most of the people I was working with and with a predisposition to writing, I pursued every aspect of it that anyone would teach me, and then slowly focused more and more on writing (though I have a pretty significant secondary specialization in fight directing).
If you weren’t a playwright, what would you do

In terms of stuff outside of theatre or film, an anthropologist or a marketing/branding strategist (I feel that they have similar skill sets).  I like the big picture perspectives of human behavior in those fields, as well as the importance of narrative, archetype, and imagery.

Within theatre aside from playwriting I spend a lot of time as a fight director.  I really enjoy the moment-to-moment narrative clarity in staged violence.  It also helps me as a playwright both in terms of getting to collaborate with a whole lot of different people and in terms of always being grounded in the reality of the actor’s body.  I think of myself as a very physical writer.  There’s a line from Edward Gordon Craig’s On the Art of the Theatre that really resonates with me where he says that “the dramatist is not the son of the poet, he is the son of the dancer.”
When did the idea for Burning Up The Dictionary first pop into your head?

The original working title was It’s Complicated, and was more about the liminality and volatile nature of unsolidified relationships than about private languages. I drafted a very rough version of it in longhand on a plane a few years back and then put it aside until this past summer when I was done with my dissertation and could focus more on my creative work.  I distilled a piece of it down into a one minute play early on that was performed in the 2010 Gi60 One-Minute Play Festival at Brooklyn College.  That piece illustrated an aspect of the characters I enjoyed playing with, but didn’t have the focus on language that I realized I was really going for.  They referred to their language but we didn’t hear them speak it.  I wanted very much to write a play where the language belonged to the characters and the audience was let in on it.  The idea of characters that speak their own invisible and private language hidden through layers of meanings has been something I’ve been toying with for years, but I didn’t connect it to this story until recently.

Since returning to this play I’ve been lucky enough to have a few opportunities to develop the early drafts and start to solidify how the language defines the characters.  The Lark Play Development Center was invaluable once I had the whole thing out, and before that I was able to hear early pieces of it through the Playwrights’ Commons summer playground program and at a Small Theatre Alliance Open Mic night.
Burning Up the Dictionary is not a typical love (or anti-love) story. What kinds of personal experiences have trickled down into Burning Up the Dictionary?

Wow, this is a delicate question considering some of the content of the play.

As I said earlier, when people are close for a long time they start speaking their own private language.  As someone aware of language, pieces of those experiences made it into this play.  I don’t directly quote anyone that I used to know in Burning Up the Dictionary as it’s not based on any specific people (and because that’s just a bad idea), but some personal experiences have made it into the play.  Anyone who has been through a rocky period in a relationship will recognize certain things that happen.

I had a brief preoccupation with Argentine Tango for a while (I had to give it up for marathon training), so when that enters the story some of those observations are my own.  The intimacy of that particular dance is important in terms of what the characters are doing to each other.

I also once had the misfortune of living in close proximity to a mutually emotionally abusive couple.  (Nothing of those people is in this play at all as I want my characters to actually be likeable.)  Having seen that dynamic in action was useful in creating two characters that love each other but should not be allowed anywhere near each other.
What’s next on the docket for you? Do you have any upcoming projects?

There are two major collaborative writing projects in the works: I’m co-writing a libretto with my friend and fellow Boston playwright Silvia Graziano based on the Marquis De Sade’s Justine.  Chauncey Moore is composing our music.  We had a second reading of the libretto this past Valentine’s Day with Fort Point Theatre Channel and now we’re starting to move forward with music and the rewrites that music will demand.  That project started as a joke, until I had the good fortune to make that joke in front of Silvia.  I’m also co-writing a piece called Trajectories with my friend Chris Mandia for a new company called Evet Arts.  It’s a physical theatre piece based on stories from American servicemen in Iraq and Afghanistan.  The hope for that piece is to have performances in both Boston and Chicago within the next year.

I’m working on the preface and proofs and whatnot for the inclusion of my documentary drama, Bystander 9/11 into an anthology that’s scheduled to be released by Methuen Drama in the UK next year.  I always have plays, stories, poems, and scholarly writing in circulation that I’m waiting to hear back on, but I try not to announce anything that’s not fairly definite.

This season I became an artistic associate of Whistler in the Dark after multiple collaborations, which now means that something interesting is always on the horizon, and I somehow managed to get myself elected to the board of the Small Theatre Alliance of Boston,

I’m also almost always fight directing something (sometimes as many as eight somethings at once), but my involvement in those projects waxes and wanes.
What advice can you offer other playwrights?

See as much theatre as you can.

Read a lot, and not just theatre.

Learn how to do things in theatre beyond playwriting.  Our greatest writers were also something else, I believe that that’s because they knew how theatre worked on multiple levels and it influenced their stagecraft as much as their literary values.

If you find people that believe in your writing, stick with them.

One thought on “Interview with Meron Langsner, Burning up the Dictionary”